The Quartiers Danses Festival has made its mission to democratize contemporary dance in all its forms and hybrids by making it more accessible to all audiences in traditional and unusual venues. The FQD primarily presents shows from local artists, but also frequently invites national and international creators. It adopts a multidisciplinary approach to original dance that comprises presentation, performances, installations, films, exhibits, meetings, discussions, and, last but not least, cultural mediation workshops.

Convinced that dance is a universal language that speaks to all of us, the Festival seeks to include artists of all generations (emerging talents and renowned contemporary choreographers alike), of all genders, of all cultures, and of all horizons (differently mentally- and physically-abled, Indigenous, and under-represented artists). The FQD presents debut works, works in progress or new versions (creative laboratories), and reconstructed performances from the choreographic heritage; sometimes performed by pre-professionals.

The festival affords enviable visibility to local and international artists.  Exchanges with other cities, provinces, and countries are organized to promote Quebec dance performers, choreographers, and directors.

3. Bringing dance closer to its audience

In keeping with its inclusion mandate, the Festival is active in several Montreal neighbourhoods with cultural mediation workshops in community, education, social, and health centres in order to make dance accessible to as many people as possible.

The FQD strives to make the work of artists from the world of dance accessible to all audiences, whose participation is encouraged. The Festival organizes performances in locations throughout the city of Montreal, depending on the specificities of every piece and in partnership with recognized performance venues, unusual spaces, neighbourhood, university, and cegep theatres, and diverse public locations. The Festival’s policy is to offer attractive prices or free admission to its shows, in keeping with its mandate of democratizing contemporary dance and increasing its reach. 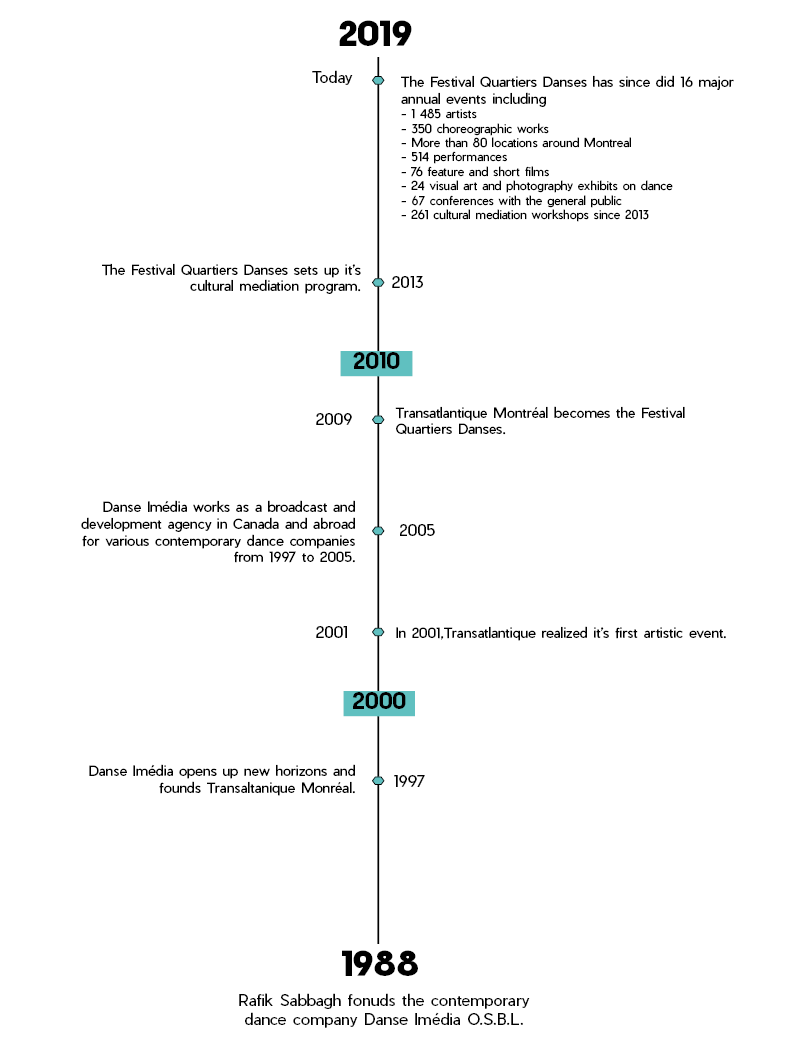 Transatlantique Montréal is founded in May 2000 by Rafik Hubert Sabbagh (Montreal).

First event, featuring one French and three Quebec companies, with five shows, a photo exhibit on dance and a conference on cultural policies at the Maison de la culture Frontenac.

Between Rafik Hubert Sabbagh (Transatlantique co-founder) and Pierre Larivière (cultural agent for the Maison de la culture Maisonneuve) for the organization of an annual event in the Mercier-Hochelaga-Maisonneuve borough in Montreal.

Event featuring four local companies and artists, two Canadian schools and two foreign acts, with six shows in three different locations in the Mercier-Hochelaga-Maisonneuve borough, two days of master classes at Circuit-Est, one danced conference and two meetings between the artists and the public. Presented at three venues in the Mercier-Hochelaga-Maisonneuve borough.

Event featuring four local companies and artists, one Canadian company, two foreign choreographers and one new outdoor show by young artists, in two different locations in the Mercier-Hochelaga-Maisonneuve borough and in Verdun, with five meetings between the artists and the public and two artist residencies.

Nineteen performances, including twelve premieres, some in situ, fourteen different shows, four evenings of films on dance and seven meetings between the artists and the public in five boroughs and nine venues/cultural partner institutions.

Festival Quartiers Danses 2011 featured 38 different choreographers and 50 events in nine indoor and six outdoor venues spread out around the city in six different neighborhoods. The festival program also included a screening of films on dance by four Canadian directors about four of the festival’s featured choreographers, as well as three photo exhibits on the previous edition of Festival Quartiers Danses.

In 2012, the Festival Quartiers Danses’s tenth edition featured 37 emerging artists, ten established choreographers and five foreign guests. In total, 24 works were shown in 20 different performing spaces spread out across seven neighbourhoods. Of these 48 performances, 16 were held indoors and 32 outdoors. There were also two photo exhibits, an evening of films about dance, as well as six workshops facilitated by some of the artists featured at the festival. This was also the first year in which the festival benefitted from the support of its spokesperson – and now chairman of its board – artist Marc Béland.

Festival Quartiers Danses presented the work of 37 choreographers, among whom two national and five international artists, 21 well-established choreographers and 11 emerging ones. Thirty-four works were shown at 14 different performing spaces in eight Montreal neighbourhoods, with 19 indoor and 34 outdoor performances, for a total of 53. The program included two showings of short dance-themed films by young Quebec directors and one showing of feature-length films, three retrospective photo exhibits on the previous editions of the festival by two photographers (from Montreal and London), a parent-child dance workshop, and a series of meetings with our artists. The festival also gave out three awards for the development of its featured artists.

Festival Quartiers Danses went all over Montreal and was present in 19 original locations, in 9 boroughs. A varied program – 68 shows and performances, 3 discussions, 5 film projections and 2 photo exhibits – brought forth the works of 31 local choreographers, 4 foreign choreographers, 11 directors and 2 photographers. This year, Festival Quartiers Danses transformed the Gesù | Centre de créativité into its headquarters. Moreover, Festival Quartiers Danses invited the audience and dance professionals to attend a series of day-long forums. Three discussions opened the floor to current themes: intergenerational choreographic meetings, dance in institutions and the challenges of dance in an urban setting.

The Festival Quartiers Danses (FQD) started this year’s new edition with 59 show performances including 25 in-theatre creations and 11 creations in an urban setting. Both on stage and outdoors, the works reflected power, identity, nature, temporality, humour, passion and rebellion, all of which were on full display. In a spirit of sharing, a blend of established, mid-career and emerging artists, local but also Canadian and Foreign artists, captured the audience. The FQD has allowed the public to discover mostly Montreal-based choreographers, but some were also from Rio de Janeiro, London, New York City, Poitiers in France, Victoria in British Columbia, Ottawa and Saint-Jean-Port-Joli.

The FQD presented its 15th edition, entitled “Les Bâtisseurs” in 12 different locations in 6 Montreal neighbourhoods. This 15th edition consisted of 26 performances, including 26 in-theatre creations and 15 urban creations, as well as 2 round tables, 3 short film screenings on dance, a walking tour at the Montreal Museum of Fine Arts, a photographic exhibition at Place des Arts and free dance workshops offered to all audiences. In 2017, the FQD presented the work of 34 local choreographers, 5 international choreographers (USA, Spain and the United Kingdom), 10 Montreal dance film directors and a photographer (United Kingdom).

The Festival Quartiers Danses (FQD) celebrated a new edition with 36 local and international choreographers and 31 videographers. In total, 56 performances, including 26 creations (13 world premieres, 2 Canadian premieres and 11 Montreal premieres) were presented at the Cinquième Salle de la Place des Arts and 14 urban creations (9 world premieres and 5 Montreal premieres) were offered to residents in seven Montreal neighbourhoods, not to mention the many related activities that took place during the festival. In addition to the 29 Montreal choreographers, the FQD welcomed 7 international choreographers from France, Germany, the United States, Belgium and India.